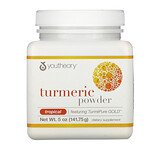 300 mg of TurmiPure GOLD™ delivers as many curcuminoids to the blood as nearly 2,000 mg of standard turmeric (containing 95% curcuminoids, with or without black pepper).

This great tasting tropical formula is instantly water-dispersible and designed for enhanced bioavailability. 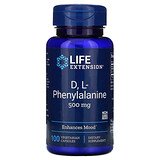 Phenylalanine is an essential amino acid that can be converted to L-tyrosine in the liver. Tyrosine is used in the nervous system to make a class of neurotransmitters called catecholamines: dopamine, norepinephrine and epinephrine. Epinephrine, made from tyrosine in the adrenal medulla, functions as a neurohormone and is known as adrenaline.

In addition to acting as a neurotransmitter that supports healthy mood and sleep, norepinephrine is now known to protect brain cells by promoting a healthy inflammatory response, inhibiting oxidative stress and supporting healthy neuronal growth and connectivity.

Dopamine, though long associated with more primal aspects of brain function linking behaviors to rewards, is recognized now as a mediator of higher-order cognitive capacities.The diminishment in brain catecholamine production that occurs with aging may be a contributing factor in normal age-related cognitive decline. Providing catecholamine precursors can help support healthy cognitive function. The enzyme that catalyzes the conversion of tyrosine to dopamine may work more efficiently if its co-factors (vitamins B6 and C) are included.

Since both norepinephrine and epinephrine can cause smooth muscle (arterial) contraction, care with blood pressure should be taken when supplementing with phenylalanine.

D,L-phenylalanine is a 50/50 mixture of its two stereoisomers.